Venancio Iñurrieta’s biography is the second book in the “Memoriak” collection published by GOGORA. The aim is to put together the jigsaw of the democratic memory of our country, by means of life stories, such as the one of Venancio Iñurrieta, Euskaltzale [Bascophile], bertsozale [Basque oral poet] and nationalist councillor in Soraluze in 1936 and who was the first person arrested by Franco’s army when they entered the town. He was taken from his home on 26 September 2916 and his wife was told "not to worry as he will be back in no time”. He returned in July 1940 singing “zutik ostostan nator” (I trudge along after a hard struggle). Four years, ten jails and a war later.

We have learnt about his hardships during that time from the letters that Venancio wrote to his family and friends, that the family kept for so many years and his grandson, Benan Oregi, used in this book. It is the story of a man, a family and the history of a whole generation. It therefore has a value that extends beyond the family circle. Ultimately, they are universal stories. 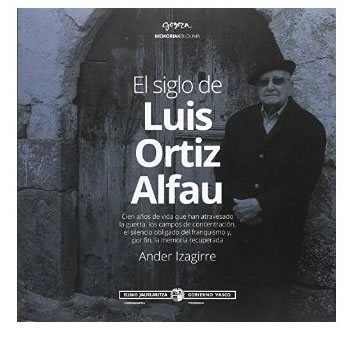 "El siglo de Luis Ortiz Alfau" written by Ander Eizagirre, the journalist and author, is the first biography with which GOGORA started its "Memoriak" collection. Its aim is to put together the jigsaw of the democratic memory of our country, by means of stories such as Luis Ortiz Alfau’s, who at a hundred years old related his experiences in the Spanish Civil War, in the concentration camps and under Franco’s dictatorship, and who continues to be a passionate campaigner to recover the historical memory.

The book can be purchased on the following page: Page